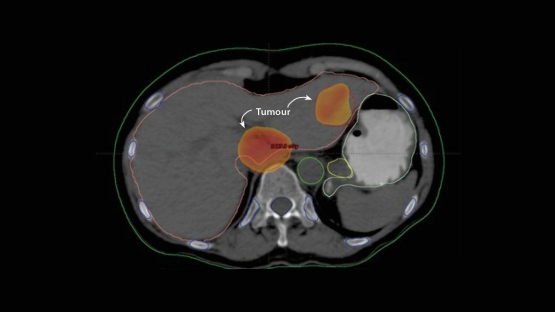 Radiation revolutionized medicine when it was first used to treat cancer in 1901. Its use, however, has only been able to evolve as far as technical innovation has allowed. Now, thanks to progress in physics, technology and computing, radiation therapy is entering a new era of precision, effectiveness and safety, and the IAEA is helping to ensure advances in radiotherapy reach patients in all parts of the world.

“These advances can improve the quality of life for the patient during treatment. And for many types of cancer, improve targeting, reduce recurrence, and improve survival rates,” said May Abdel-Wahab, Director of the IAEA’s Human Health Division. “In addition, some of these new technologies, such as stereotactic body radiation therapy (SBRT), may complement new immunotherapy treatments by enhancing the immunogenicity of the cancer.”

SBRT is just one new approach in radiotherapy — the field is growing fast. We plan to continue working closely with the IAEA to help us stay at the forefront, while also expanding collaboration and support to other countries.

Over 14 million people worldwide are diagnosed with cancer each year. Around half of all cancer patients receive radiotherapy at some point during their treatment (see Radiation therapy), and it is often used in combination with other methods, such as surgery and chemotherapy.

Many developing countries face challenges in keeping up with evolving technology and methods. Through IAEA support, countries across the world are setting up and receiving training in radiotherapy and safely transitioning to advanced techniques. “The IAEA works hard to help countries provide high-quality radiotherapy services, so that all patients can access and benefit from these life-saving tools and methods,” Abdel-Wahab said.

The goal of radiotherapy

The goal of radiotherapy is to safely maximize the treatment of a tumour using radiation, while minimizing harm to the patient’s nearby normal tissue and critical organs. To do that, specialists must first meticulously evaluate the tumour and plan treatment using diagnostic imaging and planning tools. They then use a radiation beam from a radiotherapy machine to safely hit a tumour with a carefully measured dose of radiation.

Higher doses of radiation can kill more cancer cells, but can also pose a greater risk to normal tissue nearby. “This is why ensuring precise tumour targeting and delivering accurate radiation doses is critical to safe and effective radiotherapy,” Abdel-Wahab said. “Many of the advances we see in radiotherapy revolve around improving and refining these two elements.”

Advances in imaging and treatment planning, for example, have made it possible for radiation oncologists to move from 2-D to 3-D radiotherapy techniques with relevant imaging and subsequent contouring (a process of taking images of and evaluating a tumour, defining where it ends and healthy tissue begins). A rise in automated planning tools is also helping radiation oncology specialists harness computing power to pinpoint tumours and plan out exactly how much radiation to use on which part of the tumour and from which angles.

But precision in treatment can only go as far as the quality of diagnostic images and a radiotherapy machine’s capabilities. Previous generations of diagnostic imaging were less detailed, and the capabilities of radiotherapy technology were more limited. This meant that specialists were forced to use lower radiation doses over more sessions to keep patients safe, and sometimes depending on the patient’s condition, rule out radiotherapy as a treatment option altogether.

This has changed with the advent of tools and procedures such as 3-D brachytherapy and image-guided radiation therapy, which use detailed imaging to help dynamically guide and adjust radiation during treatment. SBRT has also made it possible to provide highly precise treatment that delivers radiation from multiple directions and allows for significantly higher doses over shorter treatment times.

Surround and conquer a tumour

SBRT has taken control and precision to another level. What makes it unique is its use of 4-D images — height, width, depth, and, in some sites, motion — to plan and deliver very precise beams of radiation at a tumour from different angles. Each beam on its own has a lower radiation dose, which is safer and reduces the risk of side effects for normal tissue in its path. When the beams converge at the tumour, they expose the cancer cells to a greater combined dose of radiation. This generally means fewer sessions are needed to effectively treat a patient.

“For some types of cancers that are inoperable or cannot be effectively treated with conventional radiotherapy, SBRT is a new chance for survival,” said Tarek Shouman, Head of Radiation Oncology at Egypt’s National Cancer Institute (NCI), which has been working with the IAEA for over 20 years.

Shouman and the team at NCI, in part through IAEA support, are now using SBRT to treat early lung cancer and recurrent head and neck cancer, as well as a type of liver cancer called hepatocellular carcinoma (HCC), the most common cancer among men in Egypt.

For liver cancers like HCC, SBRT has radically improved radiation treatment options, Shouman explained. Liver cancer is now the third most common cause of cancer deaths in the world. For years, this form of cancer could not be effectively treated using radiation; conventional radiotherapy cannot safely deliver radiation doses high enough to treat a liver tumour because of risks to the surrounding healthy liver tissue. With SBRT, even very small liver tumours can be treated with higher doses of radiation while preserving healthy tissue.

Studies have shown that SBRT can reduce the number of treatments for HCC as well as other cancers, such as brain, lung, and head and neck, from about 30 to 35 treatments to around one to five. Over a two-year treatment period, SBRT has had success rates of 80 to 90% with certain cancers. This is similar to surgically removing a tumour, but poses fewer risks.

“SBRT is just one new approach in radiotherapy — the field is growing fast. We plan to continue working closely with the IAEA to help us stay at the forefront, while also expanding collaboration and support to other countries,” Shouman said.

How nuclear science and technology help us fight cancer and improve health will be a topic discussed at the IAEA Ministerial Conference on Nuclear Science and Technology. Watch the event live on 28 to 30 November 2018. Have a look at the full programme here.

Cancer occurs when cells in the body grow and divide abnormally and uncontrollably. Radiation therapy, or radiotherapy, involves a team of experts in radiation oncology, medical physics and radiation therapy technology using a radiotherapy machine to target ionizing radiation at cancer cells. Depending on the type and location of the cancer, the team may use external beams of radiation or radiation sources placed inside the patient’s body. The radiation damages DNA in the cancer cells. As the cells are faulty, their DNA cannot be repaired, destroying the cells’ ability to divide and grow and eventually causing them to die. Normal cells — which are also exposed to radiation during treatment — are better able to repair themselves because they are healthy, which increases their chances of survival during radiotherapy.