Cherenkov radiation, also known as either Čerenkov or Cerenkov radiation, happens when charged particles (e.g., electrons) move through a dielectric (i.e., electrically polarizable) medium at a phase velocity greater than the speed of light in that medium.1 As the charged particles lose energy inelastically through electric field interactions with the transiently polarized medium, emission of this radiation occurs (see Figure 1).2 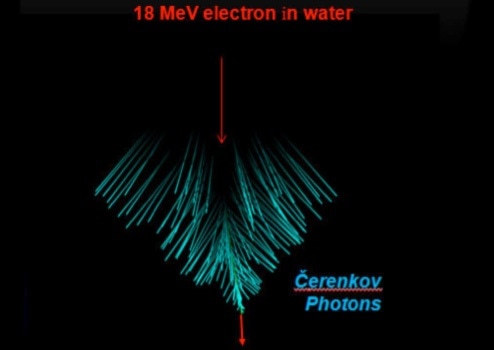 Cherenkov radiation is continuous, as opposed to fluorescence emission spectra, which posses characteristic spectral peaks that correspond to quantized energy transitions.3 Its relative intensity per unit frequency is proportional to the frequency in the visible portion of the spectrum (as shown in Figure 2).4

Therefore, visible Cherenkov radiation is seen as a brilliant blue, because this emission is more intense at higher frequencies (i.e., shorter wavelengths).3 However it should be noted that most Cherenkov radiation is actually in the UV portion of the spectrum. Only with sufficiently accelerated charges does it even become visible. 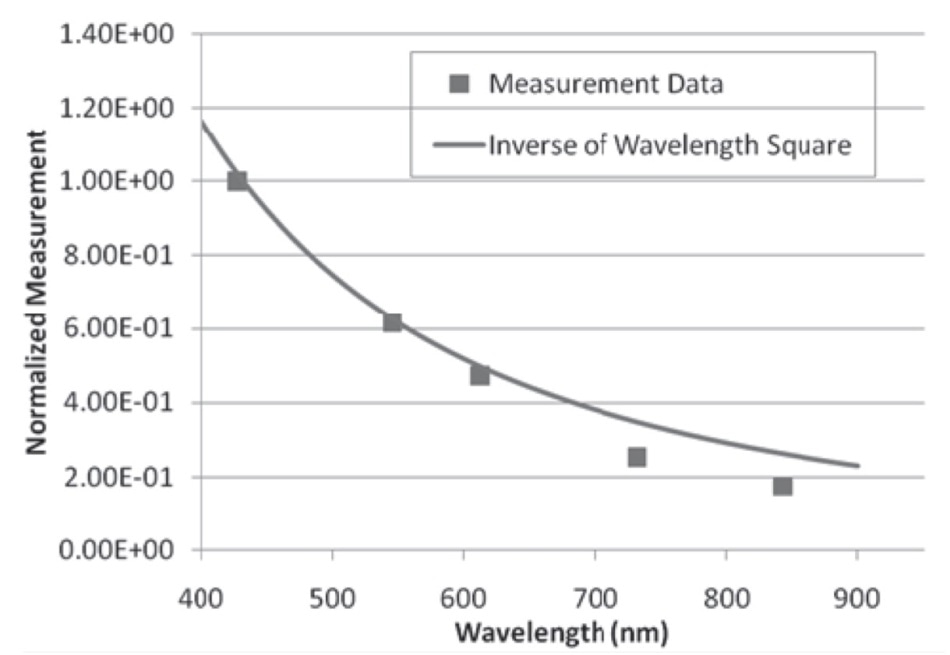 Figure 2. Results from a series of filtered scans on the wavelength of light detected from positron-emitter samples.4 The majority of the light is produced in the blue portion of the spectrum, which is expected for Cherenkov radiation, and follows an inverse relationship with the square of the wavelength. Cherenkov light extends into the green and red regions of the EM spectrum, which could increase the range of applications for in vivo imaging studies.

It is known that radiation from a linear accelerator, or a LINAC (6 to 24 MeV energy), starts Cherenkov radiation emission in tissue, which generates biochemical spectral signatures – this information can be utilized to estimate tissue hemoglobin and molecular fluorescence or oxygen saturation from reporters.5

Through radiotherapy, spectral absorption features observed in the Cherenkov radiation emission spectrum can be used to quantify blood oxygen saturation (StO2) from the known absorptions of hemoglobin.2 It has also been shown that isotopic β-emitters (18F, 11C, and 13N, with energy <1 MeV)3,6,7 produce Cherenkov emission, which is frequently utilized for optical molecular imaging in small animals.

The tracer used most frequently is the 18F-labeled analog of glucose, 2’-deoxy-2’-[18F]fluoro-D-glucose, or FDG.4 Cells which are metabolically active (for example in the heart, brain, or in malignant tumors) are glucose hungry and so collect FDG more quickly than other tissues.8 FDG is employed to locate metastatic lesions with higher sensitivity than anatomical imaging modes, assess cancer patients, and monitor therapeutic response as it is a marker of cellular glucose consumption and metabolic rate.9–11

The Cherenkov visible photon yield with high-energy particles shows exponential dependence; its optical emission per particle with a higher-energy beam (i.e., from a LINAC) is around 2 to 3 orders of magnitude higher when compared to the emission from isotopic β-emitters.5

For this reason, LINAC-based optical molecular imaging is now attracting significant interest for clinical monitoring research and disease treatment, whereas isotopic β-emitters are generally used for the imaging of small animals (where far less depth is needed).

Until recently, Cherenkov emission spectroscopy (CES) studies had been carried out using constant wavelength (CW) signal collection in the absence12,13 of ambient lighting, just like the isotopic β-emitters–based small-animal imaging technique, using conventional EMCCD or CCD detectors – although this method prevented use on patients due to the concerns of both physician and patient compliance.5

Cherenkov emission irradiances from a LINAC or a positron emission tomography (PET) agent are around 10−6 to 10−9 W/cm2 and 10−8 to 10−12 W/cm2, respectively, depending directly upon dose rate of irradiation, whereas commercial incandescent lights have an irradiance of 10−1 to 10−3 W/cm2.5

CW detection of Cherenkov radiation is impossible in the presence of ambient light because of such huge differences in optical irradiance – PET-agent CES works by imaging in a closed environment with an almost complete absence of light.5

A Crucial Change in Direction

LINACs used in radiation oncology can generate radiation in pulsed microseconds-long bursts, produced by the accelerator waveguide.5 Time-gated detection of Cherenkov radiation is possible by taking advantage of a LINAC’s inherent pulsed operation, massively improving the ratio of signal to ambient light.5

This article gives an overview of both that work as well as more recent experiments in which Cherenkov radiation was utilized by Dr. Pogue and his associates to carry out high-resolution luminescence imaging of molecular oxygen sensors located at tissue depths up to 3 cm.

For the Dartmouth studies in 2012, optical spectra from a phantom were identified by employing an imaging spectrograph (a SpectraPro® 300 from Princeton Instruments) which was equipped with a 300 lines/mm grating blazed at 750 nm and connected to a front-illuminated ICCD camera (a PI-MAX®3:RB from Princeton Instruments) that was configured with a Gen II image intensifier and cooled to −25 °C.

The optical detection system was positioned outside the treatment room and light was gathered by utilizing a 13 m fiber bundle (Zlight, Latvia) made up of seven 400 μm diameter silica fibers in a hexagonal tip geometry (see Figure 3A).5

The fiber tip was positioned in the center of the radiation beam at the phantom surface for each experiment. A trigger-out voltage was obtained from the LINAC control unit and, using a BNC cable, was fed into the external trigger port of the ICCD camera. In the same way, the delay between the falling edge of the trigger signal and the rising edge of the LINAC beam on pulse was established as 5 μs.

In conjunction with Princeton Instruments LightField® software, the gate width, trigger delay, and frequency were all utilized to ensure accurate gating and signal acquisition from the spectrometer-ICCD–coupled system (see Figure 3B).5

Figure 3. The geometry of the measurement system and the temporal acquisition process are shown with (A) the fast time-gated spectrometer system2 as well as (B) the timeline5 of how the linear accelerator works in pulsed mode and the way to measure decays of Cherenkov radiation emission and excited luminescence (CREL). Diagram and data courtesy of Dr. Brian Pogue (Dartmouth College).

By calculating the difference between the two, isolation of the Cherenkov emission signal was obtained (see Figure 4). In order to account for characteristic system noise buildup at the high 100/100x gain, all spectra were subject to background subtraction.5

When considering the importance of tumor oxygenation in the outcome of external beam radiotherapy (EBRT), the Dartmouth researchers found that the advantages of such a system can be realized, as studies have found that hypoxic tumors are less responsive to treatment due to inadequate damage to tumor DNA.14,15

Further clinical studies have also correlated EBRT effect in head and neck cancers to tissue oxygen pressure (pO2) and proposed that pO2 increases during fractionated treatment plans.16,17 Consequently, there is huge potential value in a noninvasive technique, like CES, for monitoring tumor oxygen saturation during EBRT.5

The inability to carry out measurements in a conventional radiation treatment environment, where ambient room light is always present, is concerning for patient and physician compliance and this was emphasized by the group. However, the gated ICCD camera system which they presented offers a good solution to this problem via ~1000x reduction in ambient light contribution to the CES signal when the radiation is gated, as with a LINAC.5

It is worth noting that as small-animal imaging can be carried out in a dark environment (i.e., with a dark box) and utilizes isotopic β-emitters, which inherently have 2 to 3 orders of magnitude less visible light yield, a higher-sensitivity, electron-multiplying ICCD (emICCD) camera such as the Princeton Instruments PI-MAX4:512EM* can be used instead of a traditional ICCD camera.

More recently, Dr. Pogue and a number of his associates used Cherenkov-excited luminescence scanned imaging (CELSI) in a human body geometry to exhibit the capability of imaging local oxygenation in areas similar in size to lymph nodes (see Figure 5). The effects of concentration, depth, and minimum radiation dose were assessed.20 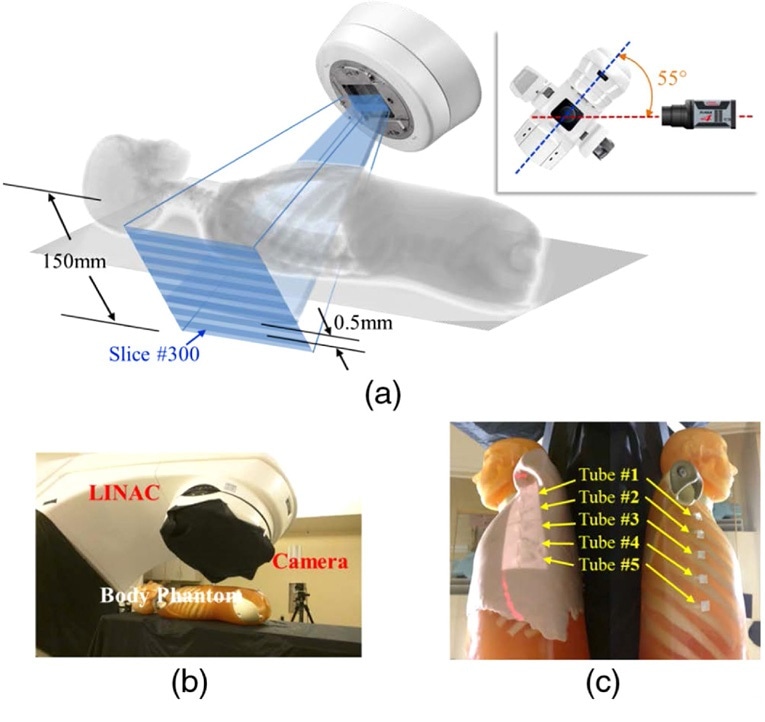 The CELSI method which was used by the researchers employed sheet-shaped radiation beams from a LINAC to generate Cherenkov photons. These photons excite probe luminescence in a volume confined primarily to the irradiation sheets.

Images of Cherenkov-excited luminescence from a planar slice within the tissue can be collected by shaping the x-ray beam into a thin sheet. A series of luminescence images are taken at different depths, which provides a three dimensional volumetric rendering.20

The camera system’s Gen III image intensifier was gated by a predefined number of pulses, but the CCD integrated the signal prior to readout. All images were taken by utilizing a 100x intensifier gain.20 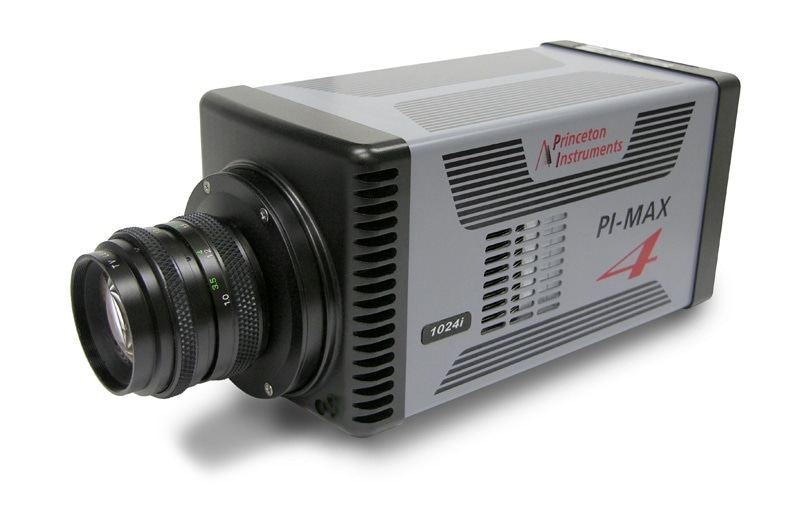 Different values of this approach to accumulations on the chip, or AoC, were used in each of the Cherenkov, background and phosphorescence images for all experiments performed. Room-light images were gathered using 1x gain and 1 AoC. An 8 MHz analog-to-digital conversion rate was used with 2 x 2 pixel hardware binning upon readout, yielding 512 x 512 pixel images.20

In the depth and concentration ranging studies, CELSI experiments were performed for an intralipid-blood phantom embedded with PtG4-containing 0.5 mm Eppendorf tubes. Results are shown in Figure 7. To pursue a minimum radiation dose, sparse illumination was investigated as well.20 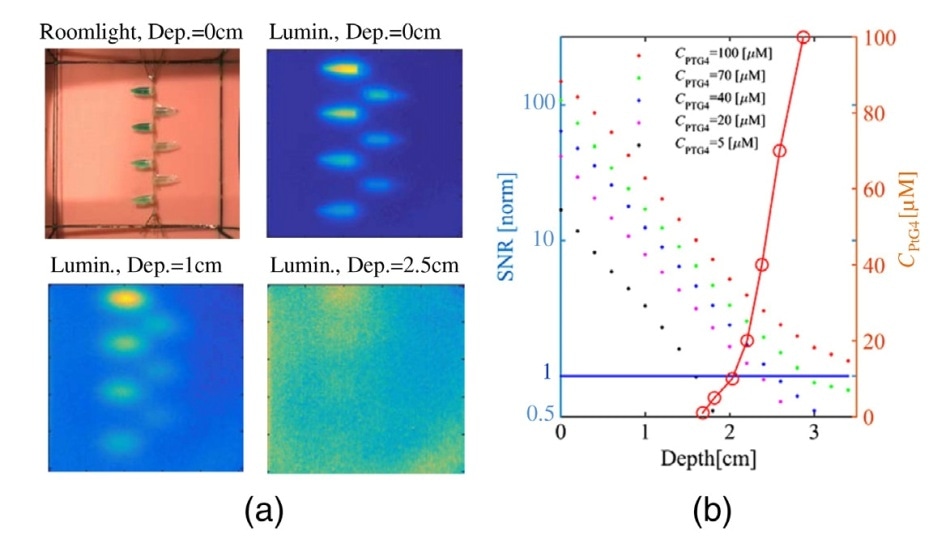 Figure 7. Image quality vs. depth for different concentrations of PtG4 (CPtG4 ) as depicted in the legend, showing (a) the room-light image and luminescence images of the phantom at three different depths in the phantom, and (b) the corresponding signal-to-noise ratio extracted from these images as a function of depth (colored dots). In the same graph, the red line shows the CPtG4 at which SNR = 1 (values on left y-axis).20 Data courtesy of Dr. Brian Pogue, Dartmouth College; first published in J. Biomed. Opt. 23 (3), 030504 (2018), doi: 10.1117/1. JBO.23.3.030504.

The researchers state that, depending on tissue type, initial studies of depth sensitivity have shown CELSI would be viable for a depth of 2 to 3 cm, and that the focus of their own study was to establish the optimal positioning of the body phantom, gantry, camera, and couch in order to gain maximum sensitivity.

This investigation found that sensing the oxygenation of lymph-node-sized objects via CELSI is feasible, and more exploration of signal analysis and agents could result in the next clinical trials in molecular sensing in radiotherapy.20

Dr. Pogue and associates report on their utilization of CELSI both in live mice and in tissue phantoms in another recently published study. A PI-MAX4:1024i gated ICCD camera from Princeton Instruments was again utilized for the experiments, which show in vivo mapping of the oxygenation of tumors at depths of several millimeters, with submillimeter resolution and nanomolar sensitivity.21

By using phantoms and simulations, the researchers observed that the performance of CELSI is limited by probe concentration, beam size, radiation dose, scan geometry, and tissue depth. They conclude that CELSI could give the highest resolution and sensitivity in the optical imaging of molecular tracers in vivo.21